Drummond’s Tract Depot was based in Stirling, and during the late 19th and early 20th centuries produced thousands of religious tracts and booklets. They were aimed at both adults and children and were printed on cheap, coloured paper, sometimes had illustrations, sold for 6d. (2.5p.) per dozen or 2/- (10p.) per 100 and would be handed out at Sunday schools, missions and possibly in the street. 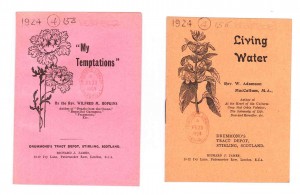 The main themes were sin and salvation and the fear of dying ‘unsaved’, but other popular topics included the evils of drinking, dishonesty, religious conversion and missionary work. They took a variety of forms – the ones for children often told a ‘real-life’ story that would lead into a passage of text from the Bible. Sometimes they were simply a list of Bible quotations chosen to prove a point, and the personal conversion story was always popular. The tracts could also be produced in series such as the “Have you?” or the “Free gift”, or individual authors would write a series of 6 or 8 leaflets which went over the same point again and again. Two of the most prolific authors were William Luff and Charles W. Lepper, although many were written anonymously or by Scottish clergymen. 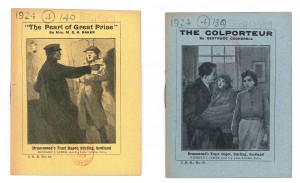 The First World War introduced the dramatic theme of ‘sudden death’, previously restricted to an occasional appearance in a tract about a train crash or a shipwreck, and the self-effacing Christian soldier, who converted his colleagues before dying heroically was a popular subject with the writers. There was also a tendency to view the war in simplistic terms – ‘plucky Belgians’, ‘heroic British’ and ‘beastly Germans’.

From an early 21st century standpoint the tracts and booklets can be dull, sound suspiciously like sermons, are repetitive, and sometimes laughable as when they tackle a ‘delicate’ subject – usually sex – in a rather roundabout way. But their aim was to get people back to church in a society which was gradually becoming more secular in outlook – whether they succeeded is unknown, but they certainly tried.

This entry was posted in Friday feature and tagged Drummond's, tracts. Bookmark the permalink.