Is there life on Venus?

In June this year, many cast their eyes (safely through filters) towards the Sun to catch a glimpse of one of the most extraordinary celestial events visible in the solar system; the transit of Venus. The image of the silhouette of Venus travelling across the surface of the Sun is visible evidence of the mechanics of the solar system, and is something quite wonderful to behold. Prior to 2012 the most recent transit was in 2004 and before then there was a much longer gap back to 1882. 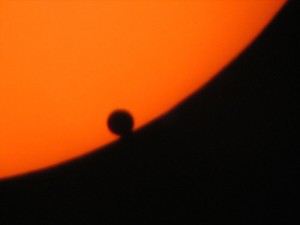 This made me think about how people viewed the solar system during the early twentieth century, from which many of the books in the Tower Project date. An extraordinary little book I discovered was a look at present scientific knowledge of the planet Venus. Is Venus inhabited? (Class mark 1916.7.2223) by C. E. Housden concludes that like Earth, there was a strong possibility that Venus was inhabited by an intelligent civilisation. This idea was gained from observations by telescope that claimed to see evidence of agriculture and artificial drainage visible through Venus’s cloud cover. 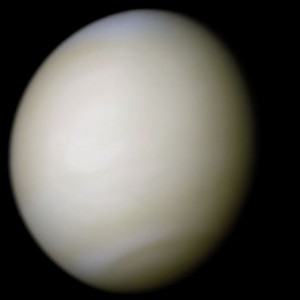 More familiar to us today was the popular idea in the early twentieth century, that Mars was also inhabited by an advanced civilisation, with the ability to shape the surface of the planet with large straight canals. This idea was made popular by science fiction novels such as H. G. Wells War of the worlds and Alexander Bogdanov’s 1908 novel Red star, which presented the idea that Mars was inhabited by an older much more advanced civilisation, which naturally in Bogdanov’s eyes, would be communist. 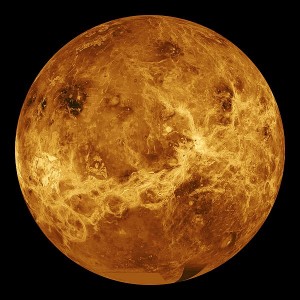 Radar view of the surface of Venus, from Magellan radar imaging between 1990-1994.

Is Venus inhabited? is most concerned with interpreting telescopic observations of Venus. These observations of the planet’s atmosphere along with supposed views of its surface (now acknowledged as impossible due to the thick layers of cloud) are compared to the climate conditions on Earth. Housden thus concludes that like Earth the equatorial regions of Venus are probable warm and wet and the Polar Regions probably have permanent ice caps. He also speculates on Venus’s water cycle works considering the greater heat the planet receives from the sun.

“A comparison of Fig. (5) with Fig. (1) suggests that water is probably so distributed over the sunlit face of Venus, and that also in very large quantities, and thus postulates the existence of intelligent life on the planet.” 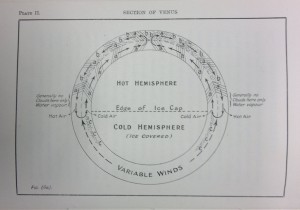 A section of Venus showing the movements of air in the atmosphere.

These channels are necessary because it was believed that Venus did not rotate on its axis and that one side was permanently facing the sun and the other was permanently in the dark and covered in ice caps.

“One set of markings would thus appear to corroborate the other [Venus and Mars]. On each planet a fight for existence, but within each case a different object in view, would appear to be in progress. On Mars the conservation of a scanty water supply, on Venus the irrigation from a plentiful, but readily evaporable, water supply of potions of its sunlit hemisphere resulting in the formation over this face of a more or less continuous cloud canopy helping to temper the great heat to which it would otherwise be subjected. Behind both systems may be perceived the working of a high order of intelligence.”

We now know that Venus rotates clockwise very slowly. One rotation takes 243 Earth days so Venus is unique in that its day lasts longer than its year (224.7 Earth days). 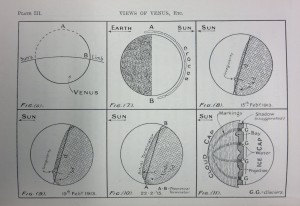 Views of Venus as illustrated by Housden.

Not every idea speculated upon by Housden is entirely wrong. It is now believed that billions of years ago Venus did hold oceans of surface water, however due to its proximity to the sun, these were evaporated away. Combined with volcanic activity, this evaporation resulted in a runaway greenhouse effect choking the planet with carbon and sulphur dioxide. Although it has been speculated that micro-organisms could survive in the upper atmosphere of Venus, sadly there were never any canals constructed by intelligent life.

Today we now know that Venus is in fact a dead, superheated hell hole, choked by the greenhouse effect caused by its own atmosphere. While it is easy to be amused by how spectacularly incorrect knowledge of the planets was one hundred years ago, it would be interesting to imagine how astronomy will advance over the next century. Will our descendants look back on our present knowledge with similar amusement?

This entry was posted in Astronomy, Invention and discovery, Space, Venus. Bookmark the permalink.