Who do you believe?

Arthur Machen, author of The bowmen

Whilst cataloguing books relating to the early days of the First World War, I couldn’t fail but notice various references to angels appearing during the Battle of Mons.  The story goes that, as the Germans advanced towards Paris against the heavily outnumbered and exhausted Allies, shining figures appeared above the battlefield and simultaneously gave new heart to the tired men and caused the German army to fall back and cease their attack.

These figures are variously described as being St. George (by the British) or St. Michael and Joan of Arc (by the French) and flanked by others in varying numbers.  Reports of their appearance emerged from wounded men in the battlefield hospitals, notably via a nurse called Phyllis Campbell, and were eventually circulated in the news press of the day.

Fever pitch seems to have been reached for a while, with various authors keen to substantiate the tales.  It is true that interest in Spiritualism was high at the time and, no doubt, people were willing to seize on anything positive to help them through the war years.  Indeed, one modern theory has it that the authorities encouraged belief in the angels as a means of boosting morale. 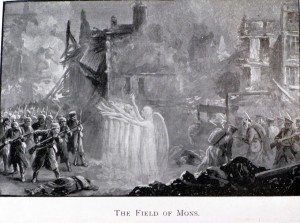 There is quite an interesting little side story to this, though.  On September 29th, 1914, there appeared a short tale in the Evening News, entitled The bowmen and penned by Arthur Machen.  Written soon after he had read contemporary newspaper accounts of the retreat at Mons and set during the early days of the war, it tells of an outnumbered army being saved by the apparition of St George.

By the author’s own admission, it is not a very well crafted story, but despite this (or perhaps because of it) it was seized upon as being based on truth.  Machen received letters asking for his sources and the evidences behind the tale and in vain did he protest that it was merely fiction.  When it was republished in a book of short stories the following August [1919.6.849] he wrote a long introduction explaining how his tale could not be true, or based on the truth.  In fact, he said, all these supposed sightings of the spiritual host were merely rumours arising out of his story.  A reprint later in the year [1919.6.850] saw an extended introduction reaffirming this and stating that the angel rumours were “some of the silliest tales that have ever disgraced the English tongue.” 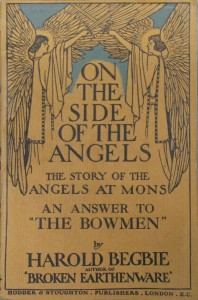 He was not believed, though, and a whole sub-set of publications appeared, purporting to prove the existence of the angels, most notably a book by Harold Begbie called On the side of the angels [1919.6.846] which barely stops short of blatantly calling Machen a liar. Begbie states that Machen’s claims that all the angel tales sprang from his work of fiction cannot possibly be true and he accuses him of being disingenuous in order to publicise his work.  Begbie insists that in fact the story was written by Machen after he had heard tell of the apparitions at Mons and therefore definitely isn’t the source of the rumours.

Begbie goes on to offer proof of angel stories being in circulation before The bowmen was published.  He quotes freely from Miss Campbell, who published her own memoirs of nursing in France during the early days of the war, when a number of wounded servicemen told her of their visions [1919.7.2308].  Others published books taking in not only the Angels of Mons, but various other battlefield spirits in order to substantiate their existence or purporting to explain the meaning and purpose of such visions.  Not to mention an extensive parody called The showmen by T.W.H. Crosland [1919.6.848].

So, did an angelic host really appear at Mons, or were they just the hallucinations of over-tired men?  Alternatively, did the whole concept just emanate from one rather badly written short story?  I’ll leave you to make up your own mind.