Hunger is the best sauce: the British diet in war time

Here in the Tower Project we are currently cataloguing books which were published during World War One. There are plenty of handbooks and manuals offering advice to those on the ‘Home Front’, especially in the key areas of domestic economy and cookery. There had been some panic buying of food at the beginning of the war, when people began to hoard food, fearing it would run out, but fortunately things calmed down and rationing only had to be introduced towards the end of the war, in early 1918. Most of the books we have come across so far contain a combination of cheap recipes and advice on saving money in the home. 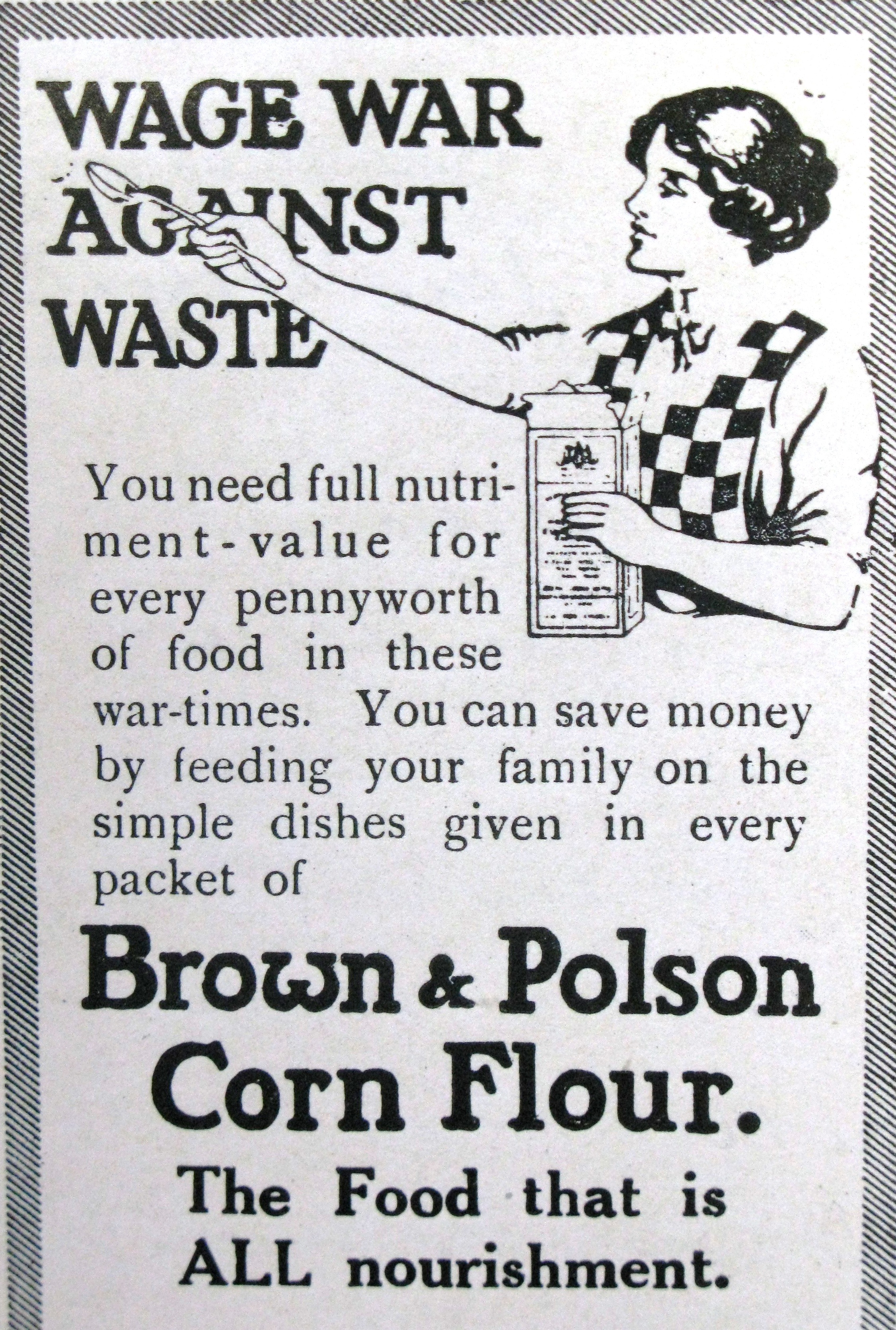 Whilst perusing a selection of these books I remembered that I have often read that the British diet was actually healthier during the two world wars when food was valued more as it was in short supply, forcing people to eat less and more wholesome food. There is evidence that this fact didn’t escape unnoticed even at the time of the First World War; Nellie R. de Lissa writes in her book War-Time Cookery, “All that I would teach you should hold good after war is over, for there is not a doubt that we are more often than not too kind to our inner man.” (p. 11). We can see here that people were encouraged to reassess their eating habits not just for economic but also health reasons. The price of sugar soared during the war and sweet treats were a rare treat rather than a daily occurrence, which they are for many people today! The authors of these books encouraged their readers to eat only what they needed for energy, rather than viewing food as a source of pleasure and enjoyment which was common before the war. Some authors even encourage people to forego one of the three daily mails altogether and reduce their consumption to two meals a day.

One of the main focuses in these books is the drive to prevent waste. The old proverb “waste not, want not” was in common use during the difficult war years. People were also encouraged to make their food last longer: “Each mouthful of soup (which should be turned many times in the mouth and not swallowed hastily as a drink) […] thus less soup will be required by the consumer, its flavour will be savoured and enjoyed to the full.” (War-Time Cookery, p. 10). In fact, many of the recipe books provide a copious number of recipes for soup, which became a very popular meal as it is warming and filling and less food is needed afterwards if you begin your meal with soup. The idea was to have a basic staple soup ready and then to add any available pulses or grains to it along with vegetables. Any leftovers, even bread, were added to soup in order to bulk it out and make it more nourishing.

Foods which were once available quite easily to the average home such as meat, fish, eggs and cheese became much more expensive during the war. Foodstuffs like OXO became invaluable in the kitchen as they provided the flavour of meat without the cost, and it was common for shoppers to buy bones from the butcher for breaking up and boiling down for stock and gravy, rather than buying a whole joint of meat. 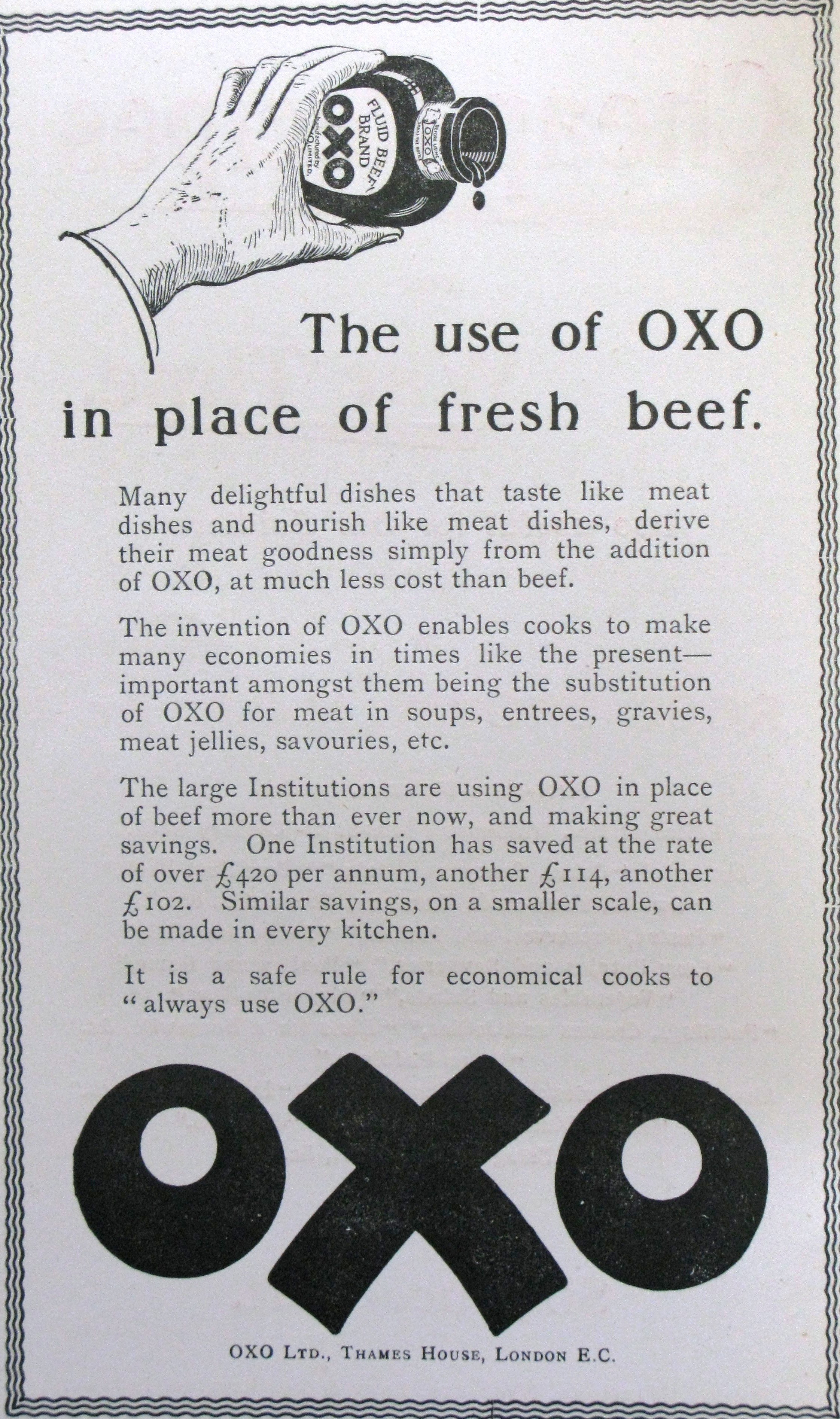 There was a big drive on growing your own fruit and veg, even if you only had a small garden. People were encouraged to buy seasonal fruit and vegetables for maximum freshness but also because produce is cheaper when it is more plentiful. Vegetable bottling and fruit preserving without sugar became extremely popular and we have many books on how to make your own at home. These could then be used to sweeten dishes which would ordinarily call for sugar.

Lots of the recipes included in these books are very stodgy so as to be as filling as possible. I couldn’t believe how many varieties of porridge existed! I listed recipes for Scot’s Porage Oats, hominy porridge, wheatmeal porridge, milk porridge, semolina porridge, maize porridge and oatmeal porridge! Porridge was the warmest, most filling and a nutritious way to start the day and could also be made for the most part with water, and a little goes a long way. 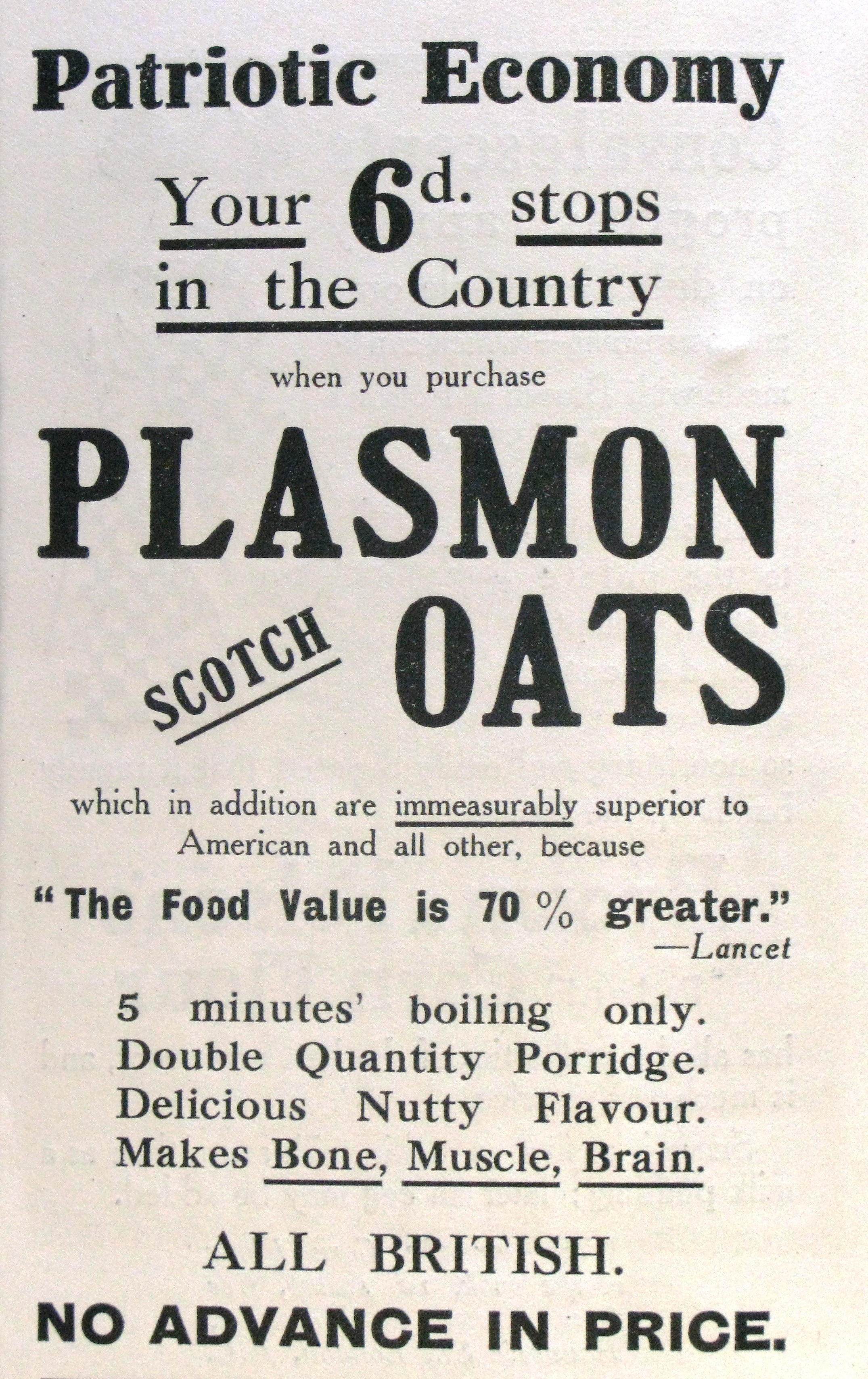 But it seems the greatest change for most people and the change that was hardest to make and work around was the shortage of meat. There seemed to be quite a furore over whether it was possible to survive without meat in one’s diet. “People are asking, “Is it safe for me to give up all flesh-foods […] shall I not starve without it?”” (Health without meat, p. vi). Similarly, there seemed to be a stigma attached to the word ‘vegetarian’: “I hope that, just because people are anxious to eat less flesh-foods on account of the increased prices of meat, fish, etc., they will not be labelled “vegetarian”!” (Health without meat, p. v).

Finally,  a recipe that left me highly confused: ‘Cheese soufflé without cheese’. Bizarrely the recipe actually calls for 4 oz. of good, strong dry cheese. The author then goes on to say “This soufflé should have the full flavour of cheese, without the actual cheese itself”. (Health without meat, p. 81). I can only conclude that the author may have been a little hungry by this point!

This entry was posted in Friday feature. Bookmark the permalink.

1 Response to Hunger is the best sauce: the British diet in war time