Tarzan – a Romance of the Jungle 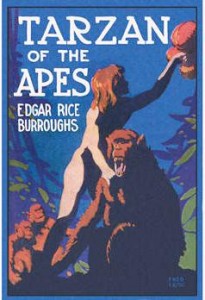 Tarzan of the Apes – British edition 1917

This is a remarkable and sensational book, which tells the story of a young English aristocrat who, born on a desert island, learns from the apes the dread secrets of the forest. The adventures which befall him, his perils and his triumphs, must be read to be believed

Tarzan is a cultural icon that people are familiar with through books, films, televison and comics. As we move along in the Tower Project we’re finding many of the original novels crossing our desks. The Tarzan series started out as a serial in pulp magazine All-Story in October 1912. The story proved so popular that it was published in book form, first in America in 1914 and then in Great Britain in 1917. The author, Edgar Rice Burroughs, started writing for pulp magazines since he was convinced that he could do a better job of it than some of the authors. Based on the success of his creation it looks like he was proved right!

Burroughs became one of the first authors to exploit the popularity of his characters by giving his permission for films, comics and tie-in products to be produced. His publishers advised him against this strategy since they feared that having too many products featuring Tarzan would mean that the public would get sick of the character. They needn’t have worried though – the films and merchandise were both a huge success. Burroughs founded his own company, Edgar Rice Burroughs Inc., in order to look after his characters. The company is still going strong and today continues to manage Burroughs’ creations around the world.

Tarzan has been the subject of several film, television and radio adaptations. The first films were silent but when talkies were invented the Tarzan film franchise became a big hit. Several actors have portrayed the King of the Apes over the years and one, James Pierce, even went on to marry Burroughs daughter Joan.  There have also been at least three musicals based on the popular stories, not to mention a sketch by the Muppets! 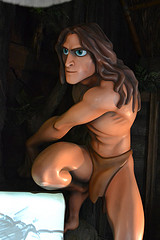 In addition to Tarzan, Burroughs wrote some popular science fiction novels including the Barsoom series which featured the popular character of John Carter of Mars. This series of books was recently made into a film by Disney, which highlights the continued popularity that Burroughs work has today. It is also said that these science fiction novels inspired many of authors of the genre throughout the twentieth century, as well as many notable scientists such as Carl Sagan. People grew up reading these exciting stories of adventure in far off planets and this inspired them in their future careers.