It’s that time of year again, spring is nearly sprung, and we are beginning to feel a change in the air, that breath of optimism, inspiring us to look ahead to new beginnings, sloughing off the torpid despond of the dark winter months, well, something like that, anyway. The other day I picked up a book to catalogue and realised I’d found the very volume I needed to galvanise me into a seasonal surge of energy, written by George H. Knox, founder of the wonderfully named Knox Institute of Individual Efficiency. 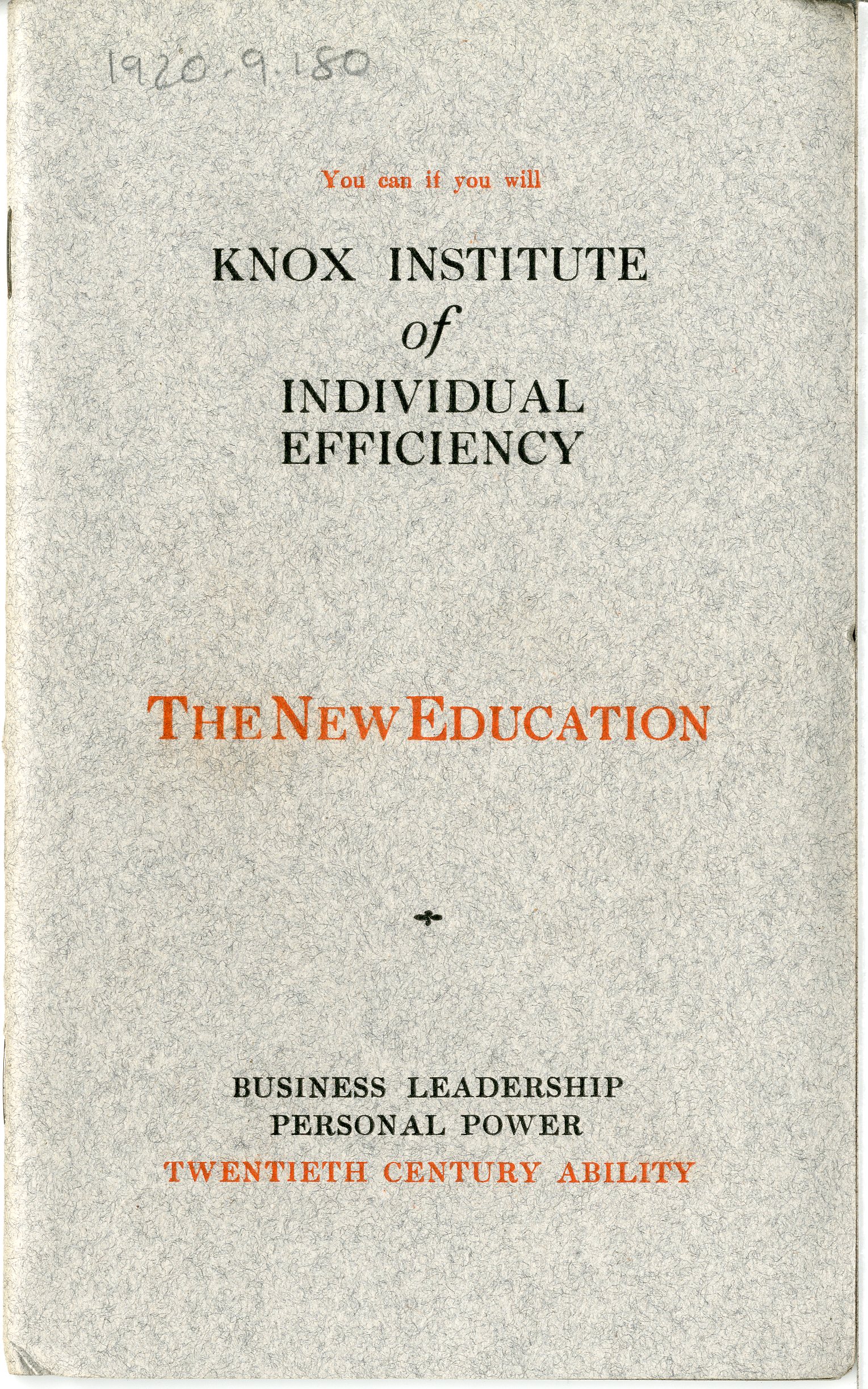 We tend to forget that all those self-improvement books that dominate our bookshops, enjoining us to diet, get fit, practise meditation, improve our memories, be successful and generally stop being so pathetic, are part of a trend that started in the 19th century with Samuel Smiles’ book “Self-help,” published by John Murray in 1859. By 1904, the year of his death, Smiles’ book had sold over a quarter of a million copies. We all know its opening line:

“Heaven helps those who help themselves.”

Smiles’ emphasis was on the education and improvement of ordinary working people, and the importance of character as a driving force to success. This tells us something about the cultural context in which Smiles wrote, and the impact of his upbringing, influenced as it was by many and various radical people and beliefs, including the Cameronians, the Anti-Burghers, Calvinism and Unitarianism. In a speech to a Mutual Improvement Society in Leeds in 1845, entitled “The education of the working classes,” he said:

“Every human being has a great mission to perform, noble faculties to cultivate, a vast destiny to accomplish. He should have the means of education, and of exerting freely all the powers of his godlike nature.”

My book by George H. Knox, entitled “The new education,” was published in 1920 in Los Angeles, California, and there is a definite change in tone from that of the Victorian self-help literature that preceded it. Knox’s book bears the hallmark of an unfailing faith in human progress:

“The history of the world is the history of man’s progress from ignorance, fear, poverty and despair to the dawn of a new civilization.”

“It is everyone’s privilege as well as duty to live in the sunlight of Twentieth Century achievement.”

Knox’s use of “Twentieth Century” (capitalised for emphasis)as a positive value makes clear his intention that readers must break free from the oppressive confines of the 19th century and forge ahead into the bright new future of the 20th century, where possibilities and self-realisation are readily attainable.

There are slogans scattered all over the covers of the book: “You can if you will,” “Business Leadership,” Personal Power,” “ Twentieth Century Ability,” “Inefficiency is the most expensive thing in the world.” 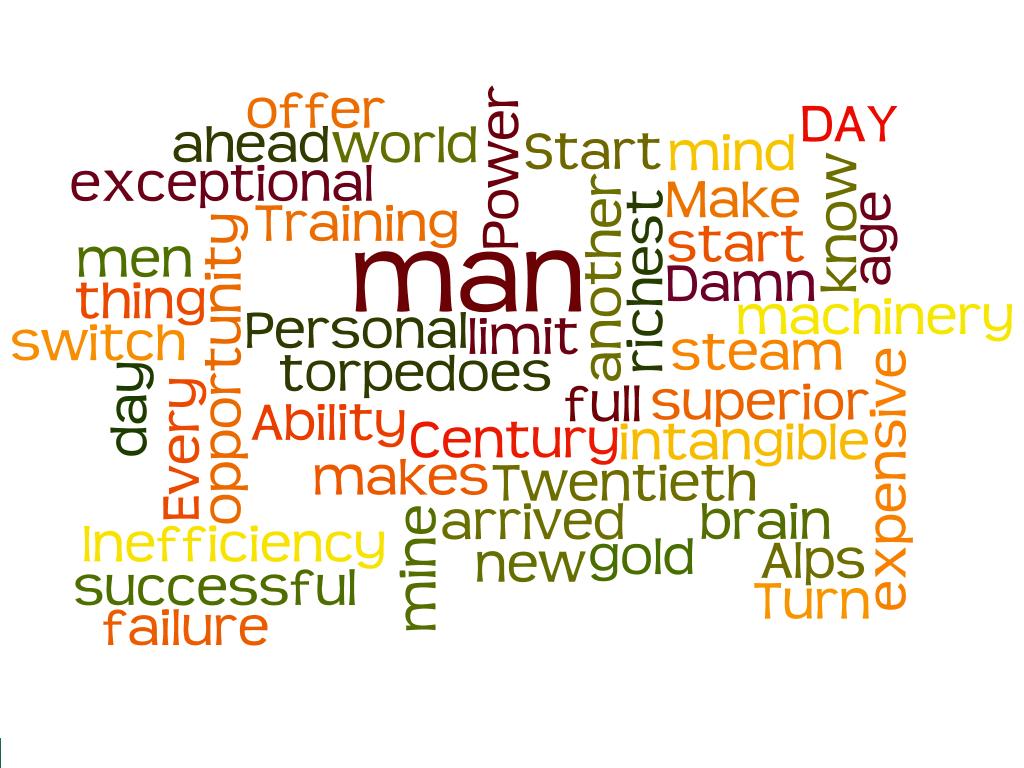 Much of the typeface in “The new education” is capitalised and in bold, paragraphs have headings such as “Any man can be superior,” “No patent on progress,” and “No limit.” This book is bursting with boundless optimism and snappy aphorisms:

“Turn on the switch. Start the machinery of the mind. Do a little prospecting.”

And my personal favourite:

“Damn the torpedoes, full steam ahead!”

Knox’s main argument is that most of us seriously under-use our brain capacity:

“It is said that the great American desert is not located in New Mexico, and Arizona, but under the average man’s hat.”

His imagery is drawn from the New World: ranches in Cripple Creek, rolling hills in South Africa, boulders in Australia filled with hidden gold, likening the potential of the human brain to undiscovered terrain rich in natural resources:

“The desert of the mind is a Paradise of possibilities.”

This gives us a sense of expanding horizons and the merit of hard work and determination, that pioneering, can-do spirit that helped settlers carve out a life for themselves in exacting circumstances.

I soon realised though that “The new education,” while full of pithy maxims and sweeping statements, wasn’t actually going to tell me how to increase my brain capacity, and that in order to do so you had to join a course  (advertised at the back of the book) at the Knox Institute of Individual Efficiency for proper training:

“The Knox Institute of Individual Efficiency is helping men and women to find their gold mine.”

and as far as I am aware, this laudable institution no longer exists.

After a while, I did start to feel a trifle inadequate and, quite simply, tired, after reading all these exhortations, so I leave it to you to ponder whether you are using your brain capacity to its fullest potential as you read George H. Knox’s inspiring (or hectoring, according to your temperament) prose:

“What have you to offer? Are you offering your best, your next best, or your worst? Are you really wanted on your job or suffered to stay? Could the firm get along just as well without you? Would your resignation make a hole in the concern hard to fill; or are there twenty men ready to fill it just as well as you can?”

This entry was posted in Uncategorized. Bookmark the permalink.

2 Responses to Improve yourself