Is there an app for that?

It may be difficult to understand now, but there was a time when there was no such thing as an iphone and we didn’t have apps to help us get through the day. At the start of the twentieth century people had to use a pen and paper to keep track of their lives, which sounds like a nightmare when you think of all the things that technology helps us keep up with today. In order to get the equivalent of an iphone full of apps a person would have had to cart around a whole suitcase full of books! Luckily, there are some books in the Tower that are small enough to be carried around, even by those carrying too much already.

The Tower collection contains a number of tiny diaries. Some of these are normal yearly diaries but some are more specific to different types 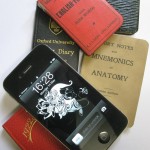 of activity, such as the Sportsman’s Engagement Book. These could be slipped into the pocket and used to jot down notes and appointments at any time. Unfortunately, there was no alarm to tell you when you were supposed to be somewhere! Some of the miniature books were designed as pocket reference aids, such as the ready reckoner’s which were used to make simple calculations. There are also aids for doctors to consult on the go – handy when they were out making their rounds. There were also various birthday books to make sure that a special day was never forgotten again.

In the days before the Kindle, people still wanted to be able to read novels on the go. In the Tower collection there are a number of novels which were written specifically for the miniature format, as well as some pocket sized classics. Often though, a popular novel was simply too long to fit a pocket sized book and so publishers produced condensed versions or selections (a little bit like a ‘greatest hits’ album). This also tended to happen a lot with poetry, such as Shakespeare’s sonnets. These could then be whipped out by any budding romantic whenever they were in need a a few words to woo the opposite sex. We also have a number of tiny children’s books which were easier for small hands to hold and could be used to make sure that children were ‘seen and not heard’ when out in public.

One of my favourite examples of the miniature books are the ones which give you handy tips for card games such as poker and bridge. Whilst these were no doubt useful for the novice player, I’m not sure the other people at the table 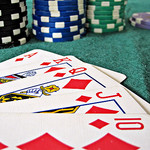 would have been too understanding had one been brought out at a crucial moment in the game! I think there might have been more than a few funny looks and accusations of cheating. Let’s not forget there’s a reason that so many pubs have banned iphone use during their quizzes…

This entry was posted in Friday feature and tagged diaries, mini books. Bookmark the permalink.