Aircraft in War and Commerce

What has struck me about the University Library Tower Collection is how quickly new technologies were embraced in the early 20thCentury and how detailed, well informed books were quickly published. One of the most exciting new technologies of the day was aircraft. Early aircraft technology is represented in the tower collection in both fiction and non-fiction. An example of non-fiction is ‘Aircraft in War and Commerce’, written by William Hibbert Berry, which was produced in at least three editions starting in 1918. It focusses on the development of the aircraft during the First World War and its post war potential as a commercial tool. 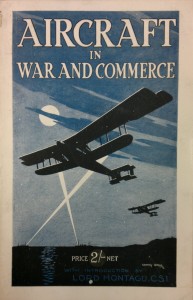 Aircraft in War and Commerce 1918.

“Wonderful as the work of the aircraft in war has been, informed opinion throughout the world holds to the view that the aeroplane has most promise for humanity in its commercial development.”

What started out as a toy for wealthy adventurers soon became a viable piece of military technology with the advent of the war. Trials were carried out by the British military in 1914 to find the best aircraft for reconnaissance (spotting and photography) and bombing. At this time the familiar fixed wing aircraft was not the only technology in the sky, there was also the airship. Aircraft in War and Commerce also looks at the airship as an example of military technology, especially the German Zeppelins used to bomb London.  Military aircraft soon became much more advanced with the development of specialist fighter planes and larger bombers and an arms race developed between the allies and the Germans. Sea planes were also developed by the principle navies, to be launched from ships. 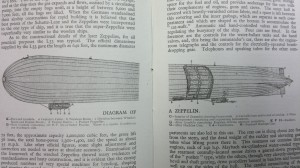 Diagram of a Zeppelin.

The third edition published in 1920 includes extra chapters on the commercial development of aircraft since the First World War. An early use featured was international air mail. It was soon realised that the commercial air travel should exploit the speed of aircraft over the bulk carrying abilities of rival forms of transport such as trains or ships.

There is also exploration of the use of aircraft for passenger travel:

“No doubt during the first years of after the war aeroplane services will be inter town, but with the creation of an aerodrome system and the bringing into being of international rules and regulations of the air these schemes will become much more ambitious. With machines actually in existence Ceylon is a matter of just under three days from London; Tokyo could be reached in four and a half days, Sydney in five days…” 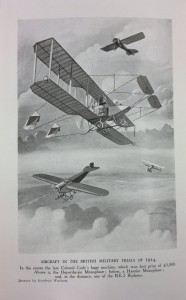 Specimens of aircraft in the British military trials of 1914.

Apart from the rudimentary comfort of aircraft, early passengers faced familiar problems with air travel we face today. Aircraft in War and Commerce foresees that long haul flights would require many landings along the way to refuel and of course the weather plays an important part in whether the plane can fly in the first place. And this is still a problem in the 21st century as any passenger whose flight has been cancelled due to snow would testify. 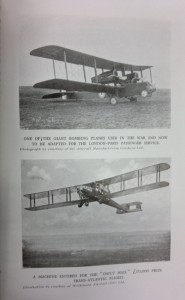 A First World War bomber adapted as a mail aircraft and the machine entered into the "Daily Mail" £10,000 trans-Atlantic flight.

Then there was the air travel infrastructure. By 1920 a new feature of the countryside had appeared, the aerodrome:

“Commercial enterprise and foresight will, in the course of a few years, build many thousands of elaborate aerodromes, but, in the first place, very simple and inexpensive affairs would be found sufficient. A flat field with some sort of wind-indicating appliance, even if be only a streamer and a telephone box would suffice”

It is hard to imagine these early airports without any duty free, win-this-car competitions or sock and tie shops! Of course the author is aware that air travel would realistically be only available to the very wealthy for the foreseeable future.

Another fascinating feature of these volumes is the early advertising for companies concerned with air travel. Names synonymous with aircraft such as Rolls-Royce were producing aircraft engines by 1918 as well as another motor car manufacturer Austin. Another fascinating advert is that for designer clothing label Burberry, with the Burberry Carapace Air-suit, “Sheath armour for the knights of the air…” 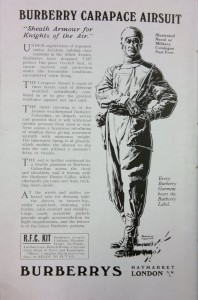 Finally Aircraft in War and Commerce accepts that air travel is one of the fastest changing industries in the world and that commercial demands would probably lead to rapid expansion in a very short time and this has proved correct over the rest of the 20th century.

“In the world of aircraft things very quickly become out of date. A few months make all the difference, and when it is remembered that thousands of millions of pounds are now invested in the aircraft industry it seems reasonable to assume that we are only in the beginning.”

1 Response to Aircraft in War and Commerce