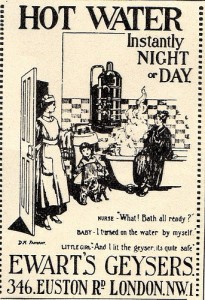 Do you remember Mr Weasley in the Harry Potter books, who collected plugs and electrical gadgets? I was never tempted to do so until I saw pictures of the early twentieth century gadgets advertised in Winter’s pie magazine printed during the first world war.  How about the Pygmy electric heater, which plugs into ‘an ordinary lamp socket’? Or an unbreakable electric light bulb?

Then I found a set of the Electrical engineers diary. It doesn’t sound a promising source of information but in fact every year it included a summary of the state of progress of persuading people to use electricity at home.  Obviously the writers in the Diary are very much in favour of electricity but I was interested to see that the general public took some convincing. In 1919 the Diary pointed out the advantages of electricity over coal or gas for cooking and heating: it was clean and fume-free, and so saved wear and tear on household furnishings (and household servants) from constant cleaning. And unlike coal, there was no need to get electricity delivered and or to carry it upstairs in buckets to every fireplace in the house. The diary has all sorts of details which Mr Weasley would have found fascinating (how long did it take to boil a pint of water in 1918? 6 minutes on a 600 W electric boiling plate.) Electric irons were apparently the most popular item of electrical equipment to be purchased in the early 1910s. By 1918 the demand for electric fires and radiators was so high that suppliers were struggling to meet it. The fires were too expensive to run for long periods, but most people were quick to recognise the attractions of an appliance which could be moved from room to room as necessary, and which provided instant heat for a short time. The adverts stress their attractive design, but they must have looked odd in a room full of wooden furniture. Or perhaps no more odd than a television or computer does today? 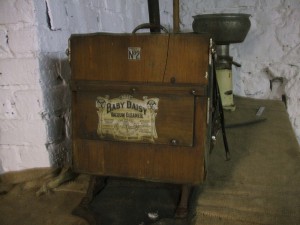 The other enthusiasm of the time was the geyser system for hot water. Being used to having central heating, I couldn’t see why a geyser was so exciting, despite the huge number of adverts telling me that it would change my life. But someone explained that (of course) in the 1910s every drop of hot water had to be heated on the kitchen range and then carried to wherever someone wanted a bath. The geyser meant that you could heat hot water when it was needed, (almost instantly) and supply it to a bath tap in a particular place instead of the servants having to carry bucket loads of hot water. There was no end to heavy housework though – another magazine from 1920 includes an advert for the Daisy vacuum cleaner – in solid oak! It was not electric – it needed 2 people to operate it, one to work the bellows and the other to work the hose!

This entry was posted in Advertisements, Invention and discovery. Bookmark the permalink.

3 Responses to The hottest gadgets