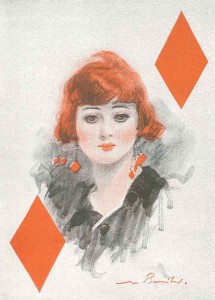 My desk is a mess at the moment, but I rather like it that way, because it’s covered with pictures of women in lovely clothes. I’m looking at the Bystander annual for 1919, and it’s strikingly different from the issues published during the war. Then, the adverts were for heavy-duty raincoats and war bonds. Now, there are adverts for pearls, perfume and permanent waves. For party dresses and for underwear pretty enough to be worn as party dresses. In the pictures, women peep out from under huge feather fans, pose on skis (presumably abroad?), and step out of sleek cars. And dance. And go to parties.

The war was over, and it shows. I’ve clearly been immersed in the first world war era for far too long, because I was quite startled by these pictures. Only last week I was looking at pictures of the women in Woolwich Arsenal packing munitions in 1918, covered from head to foot in blue overalls. The dust-jackets of novels published in 1917 show women with skirts almost to their ankles, with their long hair swept up demurely under hats. Now by 1919, women’s hair is cut short, and even bright red. The make-up’s heavy, there’s a lot of skin on view, and every woman has a cigarette attached to her fingers.

Obviously most women wouldn’t have been able to wear such clothes, held back by lack of money and the restrictions of traditional expectations. But there are signs of a new freedom even for girls who were less well off, for example in the home knitting patterns for those girls who

couldn’t afford to buy new clothes. The Priscilla sweater book includes a “country club sweater”, for example. There are sweaters for golf, skating, and fishing, all for women. Some are quite luxurious and my favourite is a scarf in rose-coloured angora wool, complete with silk tassels.

True, the world wasn’t completely rose-coloured. One cartoon in the Bystander shows a group of French children beside the wreckage of their shell-damaged home, saying “Santa will bring our presents – the chimney is still left.” In another, people wonder who will be on strike this year. There was a great deal of uneasiness about the future, some of it probably caused by glimpses of girls like these, but I can’t help enjoying the sense of fun and confidence that sparks from these pictures.

This entry was posted in Advertisements, Friday feature. Bookmark the permalink.