I don’t think anyone would disagree that summer has been a bit of a washout so far. If yourself and friends or family are feeling a bit bored during a rainy afternoon or damp weekend, I recently came across a book that would no doubt liven up any get together: “Indoor Games for Awkward Moments” could be just the ticket to pass the time until summer decides to show up (if it ever does).

Tower Project staff have catalogued many books on indoor games and entertainment, with cosy titles such as Fireside Amusements and Parlour Pastimes, so when I saw the title  “Indoor Games for Awkward Moments”, although the subject was not unfamiliar, the title certainly caught my attention! Rather than just being a generic book of entertaining games, the author, Ruth Blakely, proves to be a keen observer of the tension and social awkwardness that can exist at social gatherings, and does not hesitate in describing them. In the preface, she writes “The object of this volume is to try and lessen the number of dreadful pauses which so many hostesses have experienced with their guests”. Straight away I had the feeling that I was in for something special with this book – I wasn’t disappointed: Blakely’s caustic remarks and scathing tone throughout the book had me laughing out loud, and made me wonder whether she really had the ideal temperament to write a book of party games, or even host a party at all. For example, before describing the rules of one game, she writes: “This is a very good game for making things “go” […] and getting guests to mix and so break the ice, which frequently does not thaw till it is nearly time for the party to break up.” 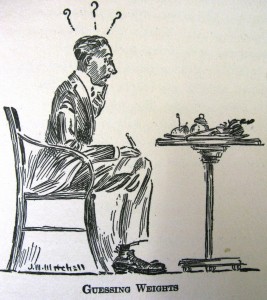 The book contains rules and descriptions of many games which are still commonly played at parties today, such as Who Am I?, Musical Chairs, and Guessing the Weight, but alongside these were some rather peculiar games, some of which I’m not sure I’d care to take part in if I wanted to leave the party with my dignity intact. Here is a selection of the best… 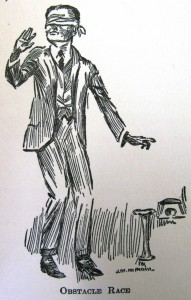 This poor partygoer doesn't yet know that he's been "done". 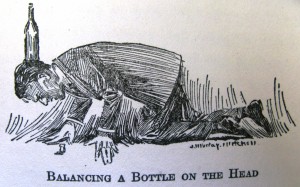 I really wouldn’t want to attempt this after a couple of drinks (or even before, in fact). 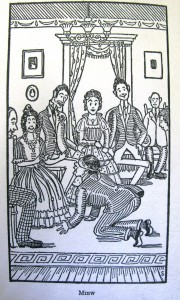 I honestly can’t believe grown adults would agree to play this game, but perhaps I am exactly the kind of party guest that Blakely is trying to loosen up! 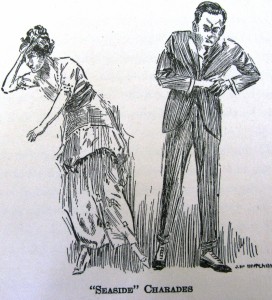 These poor guests are trying their hardest to entertain, but will have their work cut out if they’re trying to impress the author!

I think the author would have done well to remember that a relaxed host makes for relaxed guests. Maybe then there would be fewer ‘awkward moments’ to fill!

This entry was posted in Entertainment, Friday feature, Games. Bookmark the permalink.