We have catalogued a few tennis books recently, and have been struck by the changes in the game.

The earliest item I can find in the Tower is Lawn Tennis : its laws and practice, dating from 1877, the year of the first Wimbledon championship. It descrbes tennis as a “manly game, which can hardly be said of croquet”, giving “the greatest amount of exercise in the shortest space of time of any game.  As you can see from the illustrations below, the laws of the game and the equipment were very different. 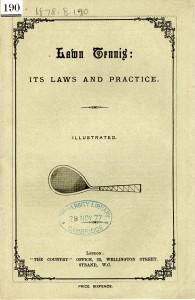 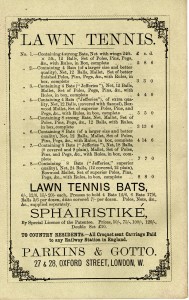 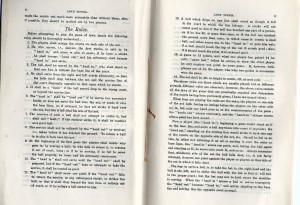 Another early curiosity is this pamphlet by the Oxford mathematician Charles L. Dodgson (better known as Lewis Carroll). He felt it unfair that players could be knocked out of a tournament after just one defeat, and came up with what seems to me to be a fiendishly complicated replacement system. The Dictionary of National Biography states that his system  “while complex, is still considered more equitable to players than current practice” – maybe, but only if they were really good at difficult sums. 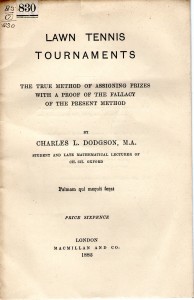 The Wimbledon authorities got around the possibility of  defending champions losing in the first round by giving them a bye to the final. This curious arrangement was only abolished when the All-England club moved to its present home in 1922. 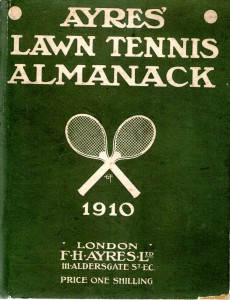 As a fan of Wisden Cricketers’ Almanack, I was interested to find copies of the tennis equivalent  – Ayres’ Lawn Tennis Almanack, which ran from 1908-1938. They give a very comprehensive review of the previous season and there is much interesting editorial matter and biographies of players and officials. The edition illustrated here is the 3rd (1910), and contains some familiar themes.  The notes by the editor, A. Wallis Myers complain of the dearth of talent in the game, and the problems of playing surfaces around the world, including the “sand and gravel court on the Continent, the rubble court in Scotland, the asphalt court in Australia, the ant-heap court in South Africa, and the wood floor in Sweden.” I can’t find any details of rubble and ant-heap courts – can anyone provide any more information?

The “bijou biographies” give details of seventy leading players and officials, including their home addresses! Many had interesting lives beyond tennis.  G.W. Hillyard, won an Olympic Gold Medal at in the Gentleman’s Doubles 1908 (at the age of 44), played first class cricket for Middlesex and the M.C.C., won prizes for golf, swimming and pigeon shooting, was adept at billiards, a good runner with beagles, and a keen motor cyclist – that’s what I call an all-rounder. 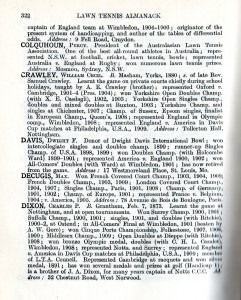 The other hardy annual is the weather. It’s hard to believe, but at one time Wimbledon fortnight had a reputation for good weather. This was not the case in 1909, when two blank days in the first week meant that play was extended to a third monday for the first time.  Apparently the public “became a little impatient with the delays, and one lady, possibly expressing the opinion of others, was heard to declare that she had never before been to Wimbledon in a mackintosh, and did not intend to break the rule.” Judging by the overcoat that the gentleman below is wearing it must have been pretty chilly. 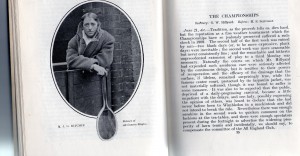 This entry was posted in Sport, Tennis. Bookmark the permalink.

2 Responses to Anyone for tennis?