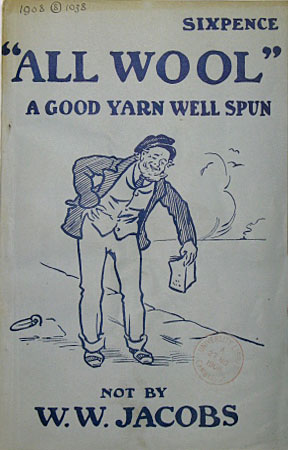 On first glance, this looks quite an ordinary sort of book.  The cover promises some kind of humour, maybe a collection of jokey anecdotes, but clearly something amusing to pass an idle hour or two with.

On a closer look, there is perhaps a hint of some kind of spoof.  W.W. Jacobs was a well-known writer of short stories, many of them based on dockyard characters.  He was born in Wapping and his father was a dockyard worker, which no doubt led to a certain amount of inspiration for his tales about Ginger Dick, Sam Small, and Peter Russett, a trio of rather feckless and credulous sailors.

Obviously, the cover illustrates one of these wharf-side characters, apparently having a good laugh at the contents of the book in his hand.  But why is it described as “not” by W.W. Jacobs?  A parody of his works then, perhaps?  Surely an entertaining read, anyway.

So, pity the poor reader, who shells out his sixpence and then opens his purchase to find this: 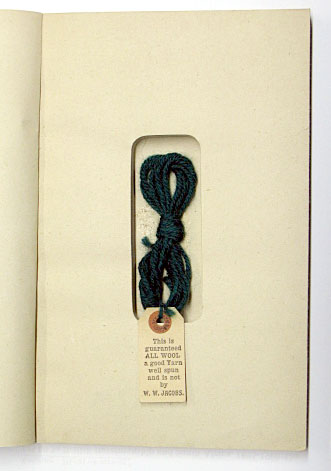 Yes, an entire volume of blank pages, each with a hole cut in the centre to reveal a skein of high quality wool glued to the final page.  An attached label repeats the message on the cover.  So, who is the joke on now?

This entry was posted in Friday feature, Oddities and tagged Jokes, W.W. Jacobs. Bookmark the permalink.