Ode to… a tram accident

Perhaps one of the best known disaster poems is William McGonagall’s infamous “The Tay Rail Bridge Disaster.”  In fact he seemed to rather specialise in writing about calamities, but he was and is by no means alone.  Poems have been written about the Titanic, Hillsborough, the 2004 tsunami, Aberfan, the Challenger space shuttle explosion… you name it, someone, somewhere has been moved to immortalise the occasion in verse. 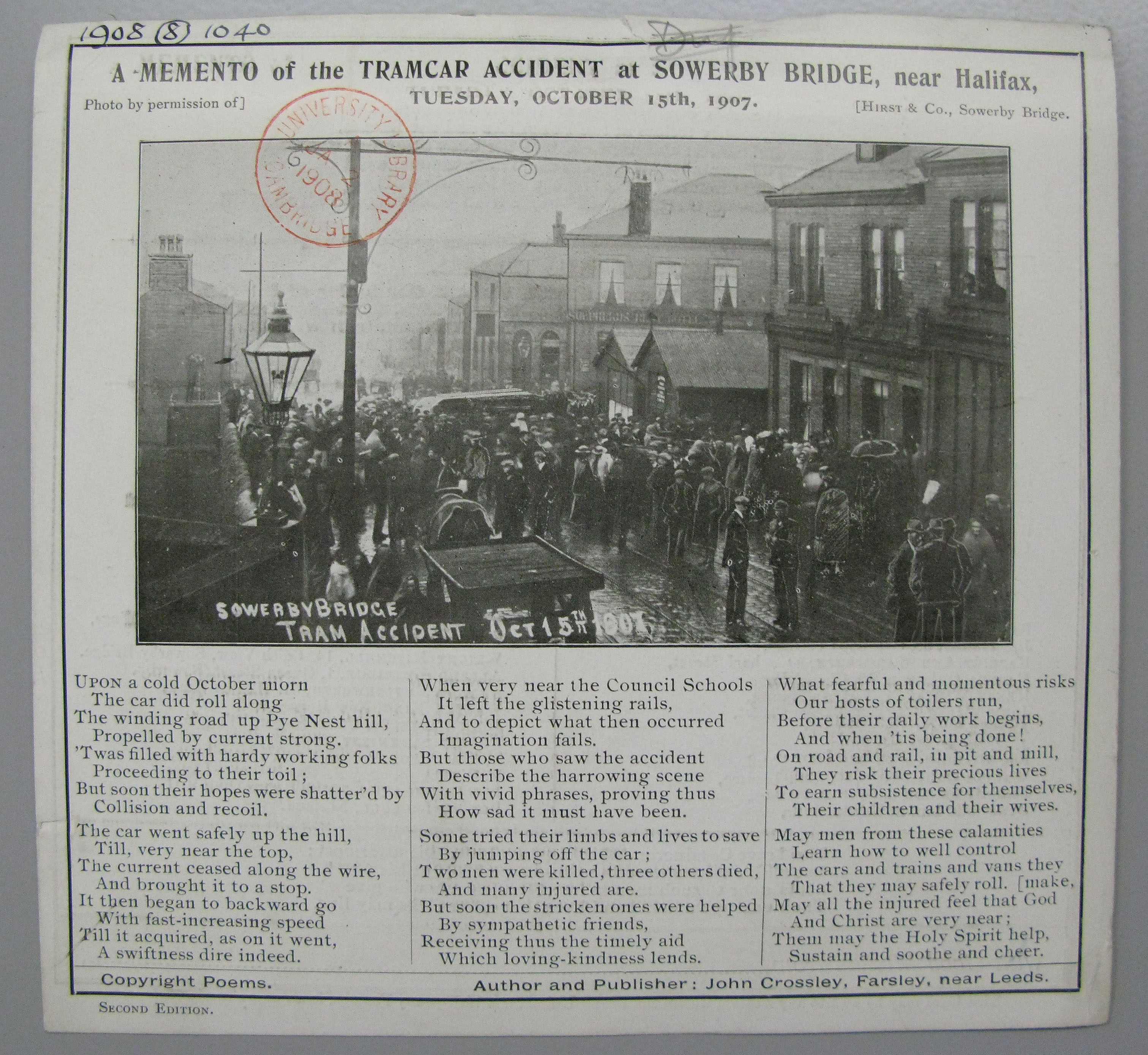 My eye was caught by “A memento of the tramcar accident at Sowerby Bridge, near Halifax, Tuesday, October 15th, 1907” [1908.8.1039].  This is a simple piece of card with a rather unexciting photograph, showing a northern cobbled street with a lot of people standing around; an overturned tram just visible in the background.    Underneath there is a six verse poem by John Crossley, which describes the incident.

Turning the card over, there is an acrostic poem eulogising about Halifax, followed rather soberingly by lists of the killed, seriously injured and less seriously injured.  At the bottom, looking rather strange to modern eyes, is the phrase “With good wishes from….”  Clearly this rather tragic memento was designed to be sent to one’s relations and friends, although with what purpose it is hard to say.

Anyone who rushed to be first to send the news to their acquaintances would have been a little premature though, as within days a second edition was published, necessitated by one of the “less seriously” injured, an 18 year old apprentice planer called Arnold Thornton, having subsequently died.  Naturally the relevant line in the poem is also adjusted to reflect the additional casualty.

This does seem to have been a particularly nasty incident; one of the worst tram disasters in Britain.  As the open-topped car, packed with at least 60 people, neared the top of Pye Hill, the electric power failed, causing the vehicle to roll backwards all the way down again, gathering speed as it went despite the best efforts of the conductor to apply the brakes.  At the bottom it jumped off the rails and overturned before smashing into a shop frontage, ultimately killing five and injuring 35 others.

The 32 year old conductor, Walter Robinson, seems to come out of this as some kind of hero, perhaps being viewed romantically because he died in the line of duty, being killed when part of the tram fell on him.  He gets a four line poem to himself on the card, being described both as “the brave conductor” and a “heroic soul.”  Furthermore £3 10s 7d of the memorial fund went to his widow – a benefit that was withheld from any of the other relatives.  Most of the money, over £19, was spent on a memorial in the grounds of the Mount Zion Chapel at Ogden, with the remaining £2 or so being used to prepare the vault in the same chapel.

Walter has his own memorial cross on his grave at the chapel, where he was a Sunday school teacher.  This reveals further tragedy in his life: his baby son died at 8 months, followed less than 3 weeks later by his wife.  His second wife lived to the ripe old age of 94, dying in 1973, but sadly they enjoyed less than a year of married life before Walter’s untimely demise.  Perhaps she took some comfort from the fact that he was hailed a hero. As he tried desperately to bring the runaway tram to a halt, he shouted warnings and stopped passengers falling off (although some of them deliberately jumped off to save themselves).  His monument states that he was “striving to the last to save the occupants of the car” and survivors later spoke of his calm command in a terrible situation.  His widow, “faithful until death,” never remarried.

The accident must have had a huge impact on the local community at the time, but is doubtless all but forgotten now, save for these rather sad poetical greetings cards.  But then this is one of the pleasures of the Tower collection – finding pieces of ephemera and discovering the stories behind them.

This entry was posted in Oddities, Transport. Bookmark the permalink.

4 Responses to Ode to… a tram accident