Two fauns and an ogre

Everybody knows Arthur Ransome wrote Swallows and Amazons; that wonderful adventure tale of children messing around with boats, which awakened a love of sailing in so many of its readers.  Most people also know he wrote another eleven books in the series, set not only in the Lakes, but also in East Anglia and around the world.

These are books that I have read time and again, but (probably like many others) I must confess I’ve never read any of the rest of his writings.  I vaguely know he wrote books on fishing, edited a collection of Russian fairy tales and was a political correspondent for the Manchester Guardian, but I’d never heard of a small volume entitled “The hoofmarks of the faun” [1911.6.1209]. 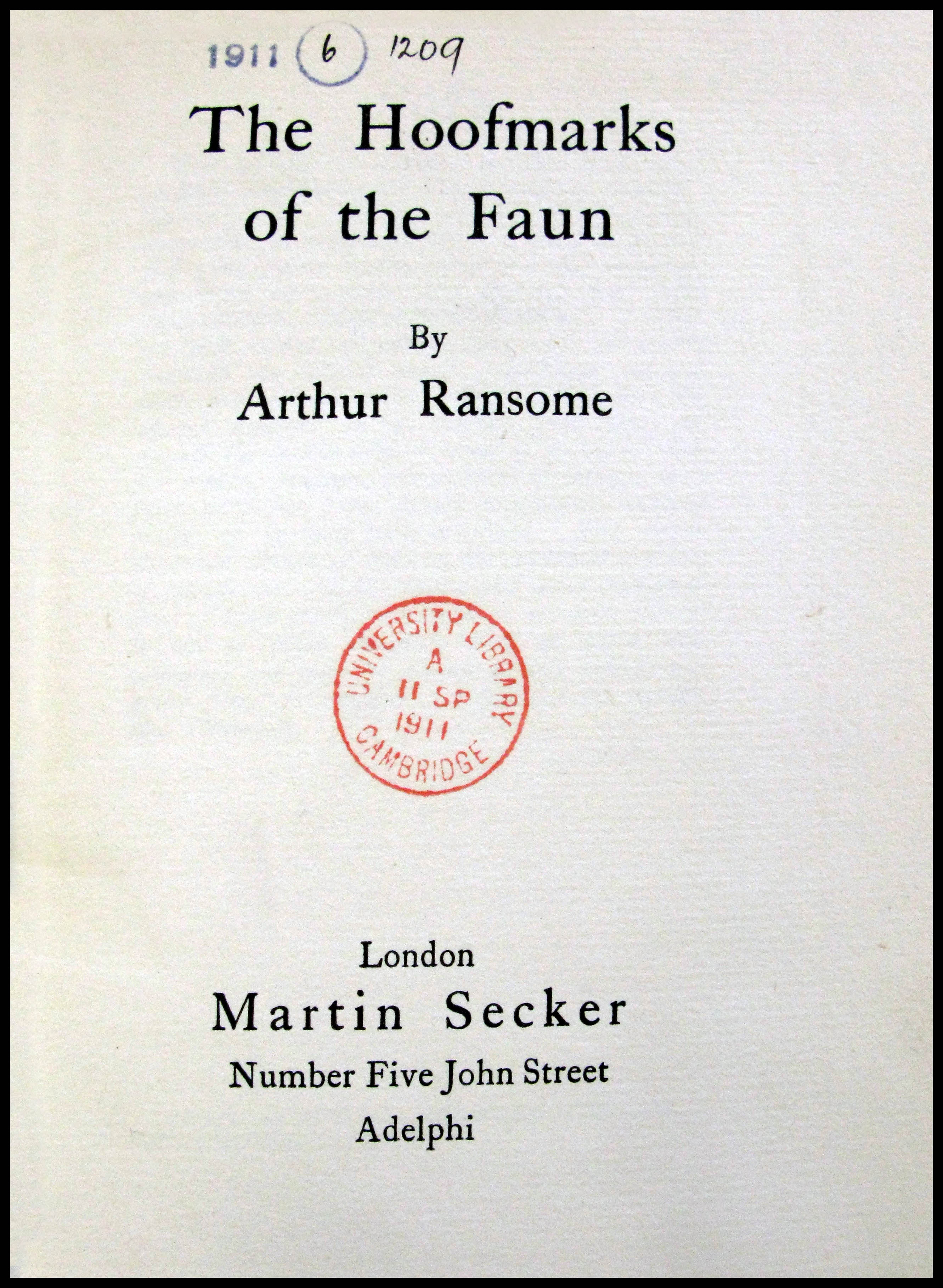 This is a collection of some very early works and, to be honest, they are not terribly good on the whole.  Written over twenty years before Swallows and Amazons, he seems to be struggling to find his style.  The publisher lost £25 on it (a fair amount of money in 1911) and needless to say, it didn’t make Ransome’s name or fortune either.

The title piece features a faun from the south, who falls in love with an elf-girl from the north but, although his feelings are reciprocated, they cannot do more than sense each other’s presence.  One day they see each other’s footsteps, but she thinks his are made by some “horrible thing.”  Learning of this from a gossipy starling, the faun sadly leaves to return to his own kind.  Not a feel-good story, then.

Neither is the closing story, “The ageing faun,” which is another tale of lost love.  In between these two are a rather odd, slightly philosophical, piece on love and dreams and a rather better story, called “The little silver snakes,” which touches on the occult, but suffers from a slightly anti-climatic ending.  Then there is a rather puzzling literary criticism on a chap called Peter Swainson, who allegedly had one book published a few days after his death.  I can find no trace of this book and no trace of this Peter Swainson in birth records of the time.  Did he really exist, or is this some kind of fantasy criticism?

“Rolf Sigurdson” is perhaps the best work in this collection, with echoes of Norse mythology, a reasonably strong storyline and a happy ending.  This one I read and enjoyed, without needing to wince at flowery prose or wonder quite what Ransome was on about.

So much for that.  My interest awakened, I dug out another early book of his, entitled “The imp and the elf and the ogre” [1911.6.590].  I expected this to be more twee fairy tales, but no, it is in fact a rather charming and informative children’s book about nature.  Ransome could write for children – that is so very apparent from this book.  In fact, if you’ll just excuse me, I think I’m going to slip away and curl up in a corner with it…

This entry was posted in Children's books, Fiction and tagged Arthur Ransome. Bookmark the permalink.