Before the personal organiser and the smartphone everyone had a diary, and in the early 20th century they came in all shapes and sizes. As well as ordinary diaries, specialist diaries were produced for everyone from clergymen to motorists and Boy Scouts to wireless enthusiasts

The ordinary diaries could be tiny, such as ‘Asprey’s Jotting Diary’ and ‘Debrett’s Waistcoat Pocket Diary’ which both only had enough space per day for very brief notes in small handwriting, through more elaborate styles with two indexes up to the one-page-a-day desk diaries. 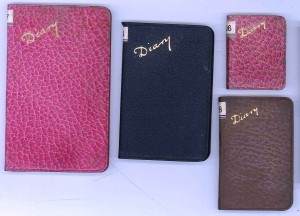 The Onoto family of diaries

Two of the most prolific publishers were Onoto who produced ‘families’ of diaries, the same diary in a variety of sizes, and Charles Letts who published series of diaries such as the Quikref to cover all types of hobbies. These would contain a lot of information of use to the gardener or motorist as well as the diary. Sometimes the diary section would be almost an afterthought such as in the ‘Surveyors and Auctioneers tables, with a diary’. Clergymen were well catered for, with the Society for Promoting Christian Knowledge and the Religious Tract Society both producing diaries, almanacks, engagement books and pocket books. Children had their own diaries – Boy Scout and Girl Guide diaries were published by James Brown in Glasgow, and cost 1/- (5p.) in 1924, so they made worthwhile Christmas or birthday presents and were not just stocking fillers, while Letts produced one based on “Chums”, a popular children’s magazine.

An interesting hybrid was the ‘kalendar’, such as the ‘From friend to friend kalendar’, the ‘Shakespeare kalendar’ and collections of seasonal or religious poetry and quotations such as the ‘Kindness kalendar’ by Amy Julia Green-Armytage, and ’Rosemary for remembrance’ by the author known as A. R. G. These were published annually and would have two pages for each month, the left-hand one with poems or quotations, the right-hand one with the days of the month. Given their decoration, the Green-Armytage ones had mother-of-pearl insets on the cover and the ones by A. R. G. delicately coloured floral designs, and the fact that there was no space to write anything, these must have been produced more as keepsakes than diaries. 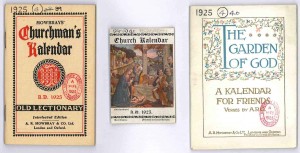 This entry was posted in Friday feature and tagged diaries. Bookmark the permalink.